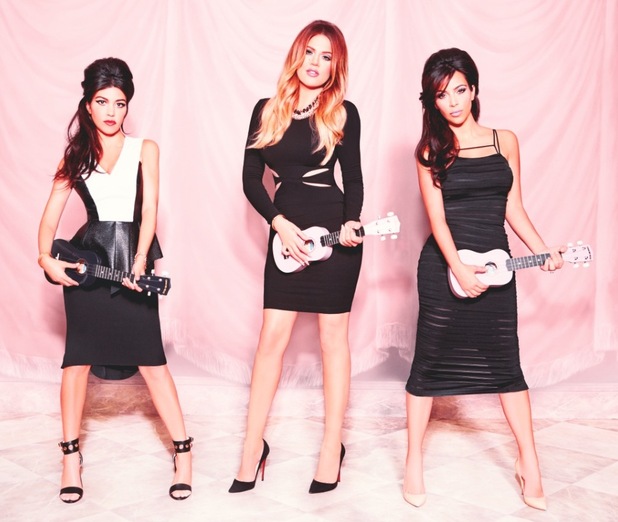 The Kardashian sisters have returned to the fashion limelight by releasing their fifth clothing collection for Lipsy, along with some smouldering new campaign snaps…

Keeping Up With The Kardashians stars Kim, Kourtney and Khloe have partnered up with the British high street retailer once again to create their autumn/winter ’14 line.

The campaign snaps are very pink, very girly and very cute, shot in a LA studio by photographer Ellen von Unwerth, with the girls posing with playful fairground-inspired props.

One photo sees the sisters sitting atop a pair of carousel horses (above), with Kourtney rocking a monochrome tuxedo jacket, Khloe smouldering in a strapless jumpsuit and Kim sizzling in a figure-hugging bodycon number.

We then see the reality stars strumming on their ukuleles (above), with Kourtney sporting a pretty peplum frock, Kim donning a semi-sheer midi number and Khloe slipping on the bodycon dress, which is her top pick from the line.

“One of my favourites is the cut out bodycon dress I wore in our campaign shoot,” says Khloe. “It comes in black and this gorgeous dark ox blood colour. I love the mix of the long sleeves with the cut out detail. It’s sexy without being too revealing.”

In the two other promo shots, the sisters pose on giant fluffy dice before cuddling up to little tiger and cheetah soft toys. Cute!

And it’s fair to see all three lovely ladies look positively stunning in the pics, with Kim and Kourtney styling their glossy raven locks in voluminous beehives and Khloe opting for loose tumbling waves.

The new collection is released this Wednesday (29 October), on the first anniversary of the Kardashian Kollection’s Lipsy debut, and includes over 20 new pieces.

“The velvet and mesh plunge neck [jumpsuit] is really glamorous,” says Kim. “We’ve also created a new version of our signature lace jumpsuit that sold out last season and the backless jumpsuit with scalloped lace trim is also really classic and sexy, and it’s perfect for the holiday season.”

The line also includes skin-tight LBDs and tailored blazers, along with toasty coats for the chillier winter season.

Chatting about her top outerwear must-have, Kourtney says: “The faux suede waterfall jacket is one of my favourites. It goes with everything and it’s light enough for me to wear in LA but can also be layered over a shirt or sweater when it’s cooler. I am all about a good layering piece.”

The Kardashian Kollection at Lipsy is available from Lipsy stores and online at www.lipsy.co.uk from Wednesday 29 October 2014.

I added 5 new photos from the 2014 photoshoot Khloé did for the Kardashian Kollection. Check them all out in the photogallery!

Ok.co.uk: Khloé Kardashian and sisters Kim and Kourtney are back with their brand new Kardashian Kollection for high street store Lipsy.

The summer 2014 range, which launches in store today, unveils 17 new pieces that are a must-have for your wardrobe.

The curvy Keeping Up With The Kardashians stars have gone for Asymmetric hemlines, evening dresses, jumpsuits and spaghetti straps.

Kim said: “Classic whites are essential for summer, and this collection includes some key pieces like the asymmetrical cut blazer and matching shorts that create the perfect combination for a sophisticated summertime look.”

“We’re California girls at heart, and I think that shows in our personal styles especially when it comes to our summer wardrobes, so we wanted our summer designs for Lipsy to reflect that as well,” she finished.

The brand new collection is the forth instalment from the girls and the line will deliver LA style combined with hot off the runway looks.

Kourtney said: “I love mixing unexpected prints and fabrics. We have an amazing tribal print in our SS14 range.”

The pieces retail from £32 to £85 and are available from www.lipsy.co.uk and selected Lipsy stores.

It’s been an up and down year for the various Kardashians, but they’re going out with bang, launching the second installment of The Kardashian Kollection for Lipsy.

The first one sold out, and this one promises 14 new pieces combining Kourtney’s eclectic mix, Kim’s glam elegance and Khloé’s rock chic look.

Published
by admin
with No comments
Kardashian Cut Out Bodycon Dress – NOW £35.00

Kim, Kourtney and Khloe Kardashian have unveiled their second Kardashian Kollection clothing line for Lipsy after their first drop flew off the shelves in October.

The three sisters have teamed up with the retailer once again for the second instalment of their range after their first drop, which was released in October, flew off the shelves in record time.

The collection features 14 brand new pieces, which draw on the individual style of Kim, Kourtney and Khloe.

The new designs will be available to buy online from December 23 and will be in Lipsy stores across the United Kingdom, Ireland, the Middle East, the Netherlands and Russia on December 29.

Prices start at just £30, and the stylish garments can also be purchased from Next, House of Fraser and Bank.

Despite pushing forward with stunning collaborations, the sisters – who have previously teamed up with Dorothy Perkins – insist they won’t be starring in their own fashion TV show in the near future.

Khloe said previously: ”Never say never, but right now there’s so much on our plate we want to just nurture what we have.”

To enter like & tell on facebook page page of lipsy would you keep the clutch or give to your BFF as the best EVER Xmas gift?

First like the picture and then leaves a comments!

Published
by admin
with No comments
Want to meet and greet Khloe from the Kardashian clan in Sydney, Australia? Well you have come to the right place!

“I’m so excited to be coming back to Sydney in November. When we launched our Kardashian Kollection handbags for Australia in 2011 we were amazed by the response, and the fact we’ve been able to expand our line from handbags, to denim, accessories, hosiery and now apparel and shoes is really a dream come true,” says Khloé Kardashian.

Khloé will meet and sign photos for the first 200 fans that register on the day who have made a purchase from Kardashian Kollection at Westfield Parramatta between Saturday, 16th November and Thursday, 21st November 2013.

The Kardashian Kollection in Australia offers a contemporary mix of ready-to-wear, jewellery, sunglasses, handbags, hosiery, denim and shoes that reflects Kourtney, Kim and Khloé Kardashian’s personal style and caters to women of all shapes and sizes.

Where you can Meet Khloe Kardashian in Europe

Kardashian Kollection is a record-breaking success

Published
by admin
with No comments
Kim, Kourtney and Khloé’s Kardashian Kollection for Lipsy has broken all records for the British retailer and is the fastest-selling collaborative collection in the brand’s history.

Within 24 hours of the eagerly-anticipated collection going on sale, many of the pieces had completely sold out.

Sales sparked when Khloé, 29, began a live Twitter chat to celebrate the launch and pass on style tips using the #KhloeKKLipsy hashtag, which within minutes became the top trending topic on Twitter in the UK.

During the chat, there were more than 50,000 visitors to the site.

Fans of glossy trio Kourtney, Kim and Khloé are delighted with the Kardashian Kollection – sleek, glamorous and figure-hugging, it encapsulates the girls’ signature styles to perfection, with black leather, leopard print and fire-engine red dominating the collection.

Speaking in an exclusive interview with HELLO! Online, oldest sister Kourtney revealed that the Kollection is “a complete mix of Kim, Khloé and I – each of our individual styles are reflected and that has been the way we have always designed.

“We are constantly emailing each other with ideas – three minds are better than one sometimes. We do have a two against one rule – if two sisters feel very strongly about a design or trend we want to try, we go for it.”

Kourtney also spoke about how the collection stands apart from their previous collection. “We wanted to offer something different to what currently exists on the British high street,” she said.

“We spent a lot of time trendforecasting and collaborating on ways to design a fresh line of fashsion-forward, affordable lucury. Kardashian Kollection for Lipsy will have some amaing standout pieces like a full lace jumper and metallic sequin jackets.”

Shot by fashion photographer Terry Richardson, who most recently sparked controversy with his risqué pictures of Miley Cyrus, the campaign pictures show the girls modelling their favourites from the collection.

A standout item is the “tribal caviar dress” – modelled by Kim, the black patterned number shows off the new mum’s slim post-pregnancy body. The 33-year-old is said to have lost over 25lbs after following the Atkins diet.

With prices ranging from £30 – £150, the Lipsy collaboration is more upmarket and trend-driven than their Dorothy Perkins collection, which launched last year.

(30 PHOTOS) Khloe Kardashian leaving at a studio in Los Angeles

Kim and Khloe Kardashian leave a Hollywood TV studio at midnight after filming for 6 hours. Kim and Khloe was interviewed by The Showbiz411 for UK Tv.