Khloe Kardashian explains why her lips are massive in KUWTK

Published
by admin
with No comments
Khloé Kardashian just made it clear: she isn’t here for any body slander, particularly when it’s geared towards a pregnant woman. 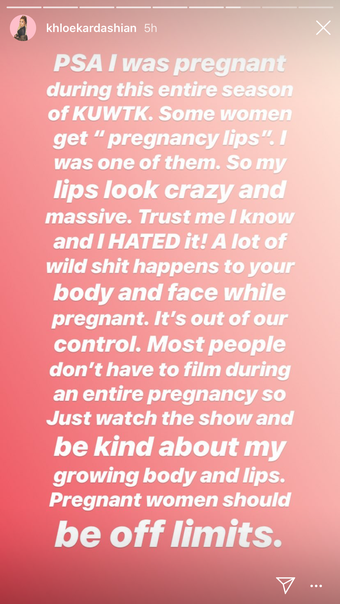 Ahead of the season 15 premiere, Kardashian took to her Instagram Story to explain why her lips look larger on Keeping Up with the Kardashians. “PSA I was pregnant during the entire season of KUWTK,” she wrote in a quote post.

According to Kardashian, some women get “pregnancy lips,” and she went on to explain that while she “hated it” and a lot of wild things happen to a woman’s body and face while pregnant. She points out that the difference between her and those other women, though, is the fact that she still had to film a show during her pregnancy.

“Just watch the show and be kind about my growing body and lips,” she ended her statement with. “Pregnant women should be off limits.”

This should be a no-brainer, but alas many moms-to-be still have their changing bodies and actions ridiculed and questioned.

That’s why this isn’t the first time Kardashian has clap backed at her haters.