She’s done with Tristan Thompson — and she’s done with getting hate about him, too. Though Khloé Kardashian is a regular clapback queen, she’d been relatively quiet about her ex ever since his cheating scandal with Jordyn Woods broke. After she eventually came out and said that it “was Tristan’s fault” Opens a New Window. and “Jordyn is not to be blamed,” she’s pretty much put the issue behind her. That doesn’t mean that trolls have stopped bringing it up in her Instagram comments, though. When one hater took it too far, the Kardashian star wasn’t having any of it.

“Great Morning!!!! 💕” the 34-year-old mom shared on Instagram on Friday, March 8 Opens a New Window. with a video of her and her daughter True Thompson as they shared a couple of kisses.

The video was sweet, and it got lots of love, but one comment stood out from the rest. “I bet Tristan is thinking the same thing waking up in another woman’s bed,” wrote one of Koko’s followers, seemingly referencing the rumors that Tristan already has a new boo, a woman named Karizma Ramirez. The comment stood out to Khloé, too — and with a little digging, she came up with the perfect response. 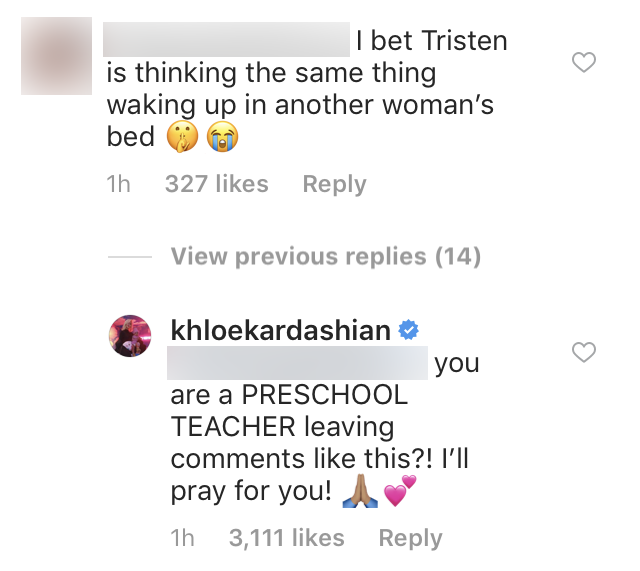 “You are a PRESCHOOL TEACHER leaving comments like this?!” snapped Khloé. “I’ll pray for you!”

The response got thousands of likes, and it just goes to show that you can clap back while keeping it classy. Though the Keeping Up with the Kardashians star could have easily lost her s–t (kind of like how she and her friends initially did at Jordyn), it seems she’s learned her lesson about reining it in.