Jameela Jamil, known for her work on The Good Place, just slammed Khloe Kardashian in her Instagram comments over Khloe‘s promotion of a weight loss meal replacement product.

“If you’re too irresponsible to: a) own up to the fact that you have a personal trainer, nutritionist, probably chef, and a surgeon to achieve your aesthetic, rather than this laxative product…And b) tell them the side effects of this NON-FDA approved product, that most doctors are saying aren’t healthy….Then I guess I have to,” Jameela wrote after Khloe posted a sponsored ad for the product. She then went into the side effects, which she says include diarrhea, stomach pains, dehydration, and more.

“It’s incredibly awful that this industry bullied you until you became this fixated on your appearance. That’s the media’s fault. But now please don’t put that back into the world, and hurt other girls, the way you have been hurt. You’re a smart woman. Be smarter than this,” Jameela added. 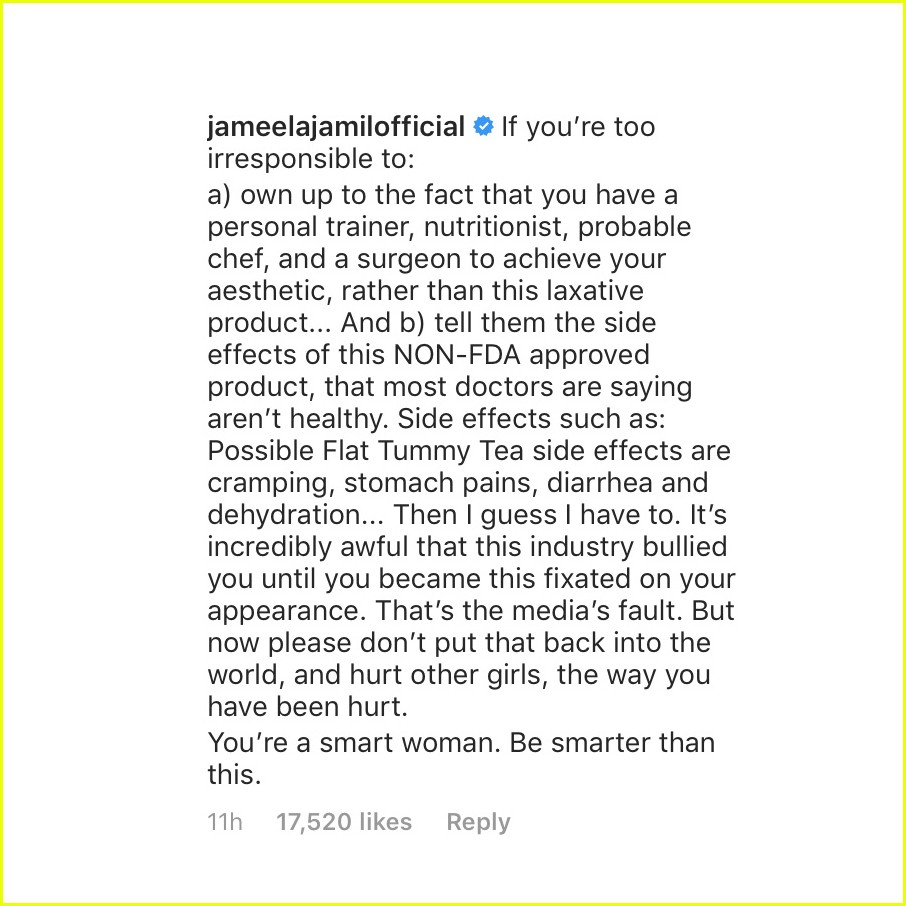 This isn’t the first time Jamil has made comments about Khloe’s sponsored posts promoting weight loss products. Back in January, the actress said Khloe was an example of what “the media” has done to women in the entertainment industry: “They fat shamed her into a prison of self-critique.”
https://www.instagram.com/p/BvP280KFj03/
It all started when Khloe shared a message on her Instagram Story that read, “2 Things a Girl Wants: 1) Lose Weight. 2) Eat.” Jameela took a screenshot of the message and posted it to Twitter, writing, “This makes me sad. I hope my daughter grows up wanting more than this. I want more than this. sending love to this poor woman. This industry did this to her. The media did it to her. They fat shamed her into a prison of self-critique. Dear girls, WANT MORE THAN THIS.”

Media outlets picked up the tweet, with several reporting that Jameela had “slammed,” “called out” and put the reality star “on blast.” She was not having it.

What Khloe Kardashian Texted Lamar Odom yesterday?
Previous Post ‘The Bachelorette’: ABC Exec Reveals How Close Khloé Kardashian Was To Becoming The Bachelorette
Next Post FREE TICKETS: Kim, Kourtney and Khloé will be on Jimmy Kimmel Live! in Las Vegas in April