Tristan Thompson scored an invitation to the Kardashian-Jenners’ epic Halloween party on Sunday.

Khloé, 38, could be seen nearby in the social media upload wearing a black bodysuit, face paint and matching cat ears.

True, was all smiles in the footage in an Owlette costume from “PJ Masks.” 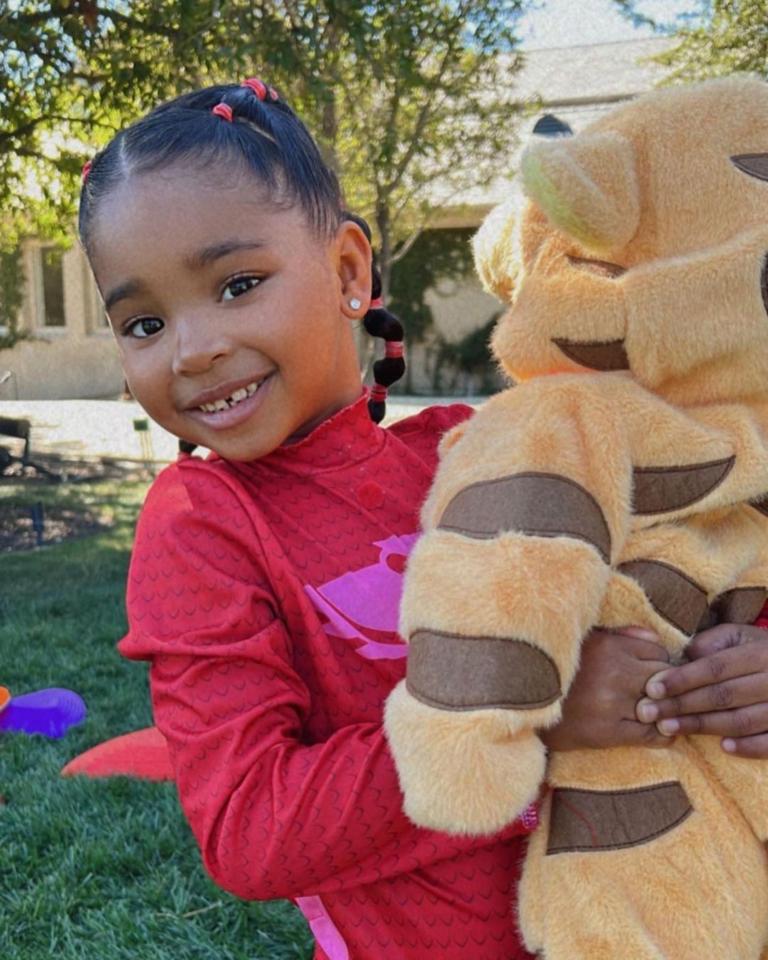 Khloé Kardashian stepped out on Wednesday, taking daughter True Thompson to an art class wearing a gray sweatsuit and a pair of Kanye West’s Yeezy 350 sneakers.

Khloe Kardashian was spotted leaving an ice cream shop with her daughter True Thompson and Stormi in Calabasas.

Khloe arrived to her sister’s celebrations in style, wearing a short mini dress paired with a bright pink bag and white silky robe. Aside from walking the tunnel at the event, she also posed for a sibling pic while hugging Kourtney.

For the look, Khloe wore her hair in an up-do and let a few loose strands hang down at the front. Her siblings Kourt and Kylie opted for a black outfit, while Kendall wore a burgundy dress for the occasion.

Khloe and Kim at ‘In N Out’ in Los Angeles

Instead of dining at Las Vegas’ Carbone and “going to a f–king Usher concert,” Kim Kardashian and Ko. were forced to spend her 42nd birthday party at an In-N-Out Burger in Los Angeles over the weekend.

The reality star-turned-billionaire business mogul was supposed to spend Saturday night splurging on high-end Italian food and getting down to the Grammy winner’s greatest hits at his Dolby Live residency at Park MGM.

But while en route to Sin City via sister Kylie Jenner’s $72 million private jet, Kardashian was informed that the pilot could not land safely due to dangerous weather conditions that included wind gusts up to 60 mph.

“The plane couldn’t land due to the wind so looks like our Carbone party and @usher concert isn’t happening and we are heading back home,” Kardashian, who turned 42 on Friday, explained via an Instagram Story.

After landing back in LA, the “Kardashians” star and her entourage, which included sister Khloé Kardashian as well as a camera crew, hit up In-N-Out for some burgers and fries.

Wearing a silver bikini top and matching pants – a look similar to her 2017 Aaliyah Halloween costume – Kim told her Instagram followers that she “had to take a boa to cover up” before entering the fast food establishment.

“We stopped at In-N-Out because we couldn’t make it to Carbone in Vegas,” Kim said in another video while panning over to Khloé Kardashian, who flashed a peace sign.

Also in attendance: Family friends Stephanie Shepherd, Kim’s former assistant, and Simon Huck, who shared photos and videos from the party on his Instagram Stories, including a clip of a white frosted birthday cake being presented to the guest of honor on a table adorned with large candles. 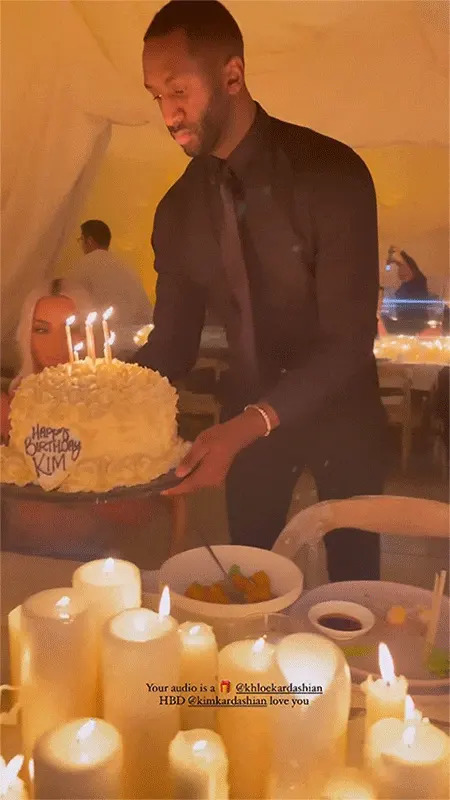 Khloé Kardashian is getting honest about a recent health scare.

Recently, Khloé was photographed on the beach with what appeared to be a flesh-colored face bandage on her left cheek.

In a series of posts on her Instagram story, Khloé said that she’d “seen numerous stories” online about the “ever-evolving bandage on my face, with some of you wondering why I’ve been wearing one for the past few weeks.”

Khloé explained that she had noticed a “small bump” on her face that looked “as minor as a zit” — but after seven months, it didn’t go away, so she had the mass biopsied.

After a second biopsy, Khloé was told that it was a tumor and that she required an “immediate” operation to remove it from her face — a “rare condition” for someone her age.

Luckily, everything went off without a hitch, and Khloé says she’s in the healing process following the operation
“You’ll continue to see my bandages and when I’m allowed, you’ll probably see a scar (and an indentation in my cheek from the tumor being removed),” she wrote. “But until then I hope you enjoy how fabulous I’m making these face bandages look.”

Khloé also said that the main point of sharing her story was “so I can remind everyone to get checked, and frequently.”

“At 19 years old, I had melanoma on my back, and I had a surgery to remove that as well, so I am [predisposed] to melanomas. Even those who are not, we should be checking all the time.”

“I am someone who wears sunscreen every day, religiously, so no one is exempt from these things. Please take this seriously and do your regular self-exams as well as your annual checkups.”

Khloe Kardashian with a bandage

Khloe Kardashian with a bandage

Khloé Kardashian is speaking out in defense of her sister.

On Wednesday, Khloé commented on an Instagram post by Kanye West where the rapper talked about his affiliation with Candace Owens and praised her for being “the only public figure to say that it was wrong for the Kardashians to keep me from seeing my daughter.”

In her comment, Khloé addressed the controversy around niece Chicago’s fourth birthday — a joint birthday party with cousin Stormi Webster — earlier this year, which the rapper has repeatedly claimed ex Kim Kardashian did not invite him to.
“Ye, I love you. I don’t want to do this on social media but YOU keep bringing it here. You are the father of my nieces and nephews and I’m trying to be respectful but please STOP tearing Kimberly down and using our family when you want to deflect,” the Good American founder wrote.

Noting that “everyone’s tired” of the birthday narrative, Khloe added, “Enough already. We all know the truth.”
“You know exactly where your children are at all times and YOU wanted separate birthdays. I have seen all of the texts to prove it. And when you changed your mind and wanted to attend, you came,” she wrote.

“Like you have pointed out yourself, she is the one taking care of your kids 80% of the time,” Khloé continued. “Please leave her and the family out of it so that the kids can be raised peacefully. 🙏🏽 I come from a place of love and I am happy to continue this conversation privately if you wish 🤍”

At the time of West’s initial claims about the birthday party, a source told PEOPLE he is “always welcome and does come to family events.”

The Yeezy founder posted a screenshot of Khloé’s comment and responded, “You are lying and are liars.”

In his all caps reply, he said that the Kardashians “basically kidnapped Chicago on her birthday so she could remember her father not being there.”

He also reiterated his previous claim that Kylie Jenner’s boyfriend, Travis Scott, was the one to share the party’s location with him, noting, “that’s how y’all play with black fathers.”

West then accused the family of throwing a party “before Psalm’s birthday when I was flying back from Japan to be there for his birthday,” adding that he learned about the celebration by “seeing pics of the party on line.”

“Also I should see my children 100% of the time, but since there’s a separation it should have been 50% of the time,” he concluded, adding, “Y’all wouldn’t have played with Donda like that, in Jesus name.”

Khloe Kardashian is reacting to a seemingly shady message that social media personality Tana Mongeau tweeted out about Tristan Thompson.

It all started during the KUWTK tell-all special that aired on Sunday (June 20), where Khloe spoke out about Tristan’s cheating and why she ultimately forgave him and got back at him.

On Sunday night, Tana sent out a tweet that mentioned Tristan attending her birthday party, plus mentioned their daughter True.

“all i know to tweet about my birthday party last night is that tristan thompson was one of the first attendees. like babe where’s true,” Tana tweeted.

Lollll Khloe’s not messing with you pic.twitter.com/KmgkhyapYP

Pagesix.com: Khloé Kardashian and Tristan Thompson broke up a few weeks ago, friends of the former couple exclusively revealed to Page Six.

“They’re getting along. There is no drama,” a source said, adding that “everything is amicable, and they are on the same page with co-parenting.”

Kardashian, 36, and Thompson, 30, are parents to 3-year-old daughter True.

According to our source, the couple split shortly after Instagram model Sydney Chase claimed during an April interview that she hooked up with the NBA player in the fall.

The news of their breakup comes after reports that Thompson was allegedly spotted entering a room with three women at a Bel Air birthday party on Friday and emerged 30 minutes later looking “disheveled” — just one day after dining with Kardashian and True.

“Tristan took off into one of the party rooms where everyone goes to hook up,” an insider claimed to Daily Mail. “He was with three women and another guy. One of the girls he was with is a regular partier — she’s always out and about at parties.”

The source continued, “The other girls have just started going out with this group. He did this in front of about 30 people so you could hear people talking.”

The insider claimed that Thompson stayed in the room with the door closed for at least 30 minutes before reemerging.

“When he arrived, his shirt looked all pressed and when he came out his shirt was a mess, he looked disheveled,” the source claimed, adding, “He continued to party for about another hour and then he left the party at about 4 a.m. with his entourage.”

The source also claimed that Thompson was having a blast as soon as he arrived at the party and wasted no time before flirting it up with one of the ladies he allegedly brought her into the private room.

“He immediately beelined to the bar where there were tons of girls; we could hear him yelling let’s do shots!” the source alleged. “He was having a blast – he was actually laughing and simultaneously taking shots and drinking straight out of a bottle of champagne.”

The insider claimed, “He was repeatedly grabbing this one girl’s butt so we all knew he was totally into her.”

One of the women is allegedly an aspiring singer from Florida while another is a California native in the beauty industry and the third is a mystery woman, who wore a pink dress.

According to the outlet, the festivities were in celebration of Drake’s security guard and good pal Chubbs and was attended by the rapper as well as Diddy, Swae Lee and Chris Brown.

Reps for Kardashian and Thompson did not immediately respond to our requests for comment, but shortly after the Daily Mail story was published, Thompson tweeted six cap emojis, which in modern slang could stand for “lying.”

The athlete has a history with being unfaithful to the “Keeping Up With the Kardashians” star, and this isn’t their first bump in the road.